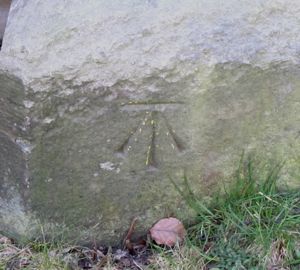 I live at Ordnance Survey Grid Reference SJ 2866 8990, at an elevation of 58.9727 metres (or thereabouts) relative to mean sea level at Newlyn, Cornwall.

I know this because there is an Ordnance Survey benchmark cut into the stone at the front door of the Lighthouse, and I managed to look it up using the Ordnance Survey Bench marks locator.

One way of finding out the grid reference for the location you’re interested in is to use the  Ordnance Survey’s Get-A-Map thing. You’ll probably need to register, and you may need to install Microsoft Silverlight as well. You might need to use a different browser (it didn’t work for me using Firefox 9.0.1 on my Mac, but Safari was OK). You should be able to get a map for your postcode, pan and zoom if necessary, and see the grid reference for the point the map is centred on. This will be the 2-letter, 6-digit version, of which the first three digits are the Easting, and the last three are the Northing. Translate to the Km-square reference by truncating the Easting and Northing to two digits each. Example: the postcode CH43 7RA gives a map; centre this on the lighthouse and note down the grid reference SJ 288 899, and feed SJ2889 into the Km-square box on the bench marks locator.

Here is the full entry for the benchmark on Bidston Lighthouse: