Wirral’s Sea Lights – Bidston and Leasowe Lighthouses – are to shine again for one night only, on Sunday 11th November 2018. The occasion is the nationwide “WW1 Beacons of Light” event, part of the “Battle’s Over” pageant which marks the centenary of signing the Armistice at the end of the First World War.

This will be the first time that the Sea Lights have been lit together in more than 110 years. Leasowe Lighthouse last shone on 5th July 1908. Bidston’s light was put out for the last time at sunrise on 9th October 1913.

British Foreign Minister Sir Edward Grey wasn’t thinking of lighthouses when he remarked, on the eve of the First World War:

“The lamps are going out all over Europe; we shall not see them lit again in our lifetime.”

It’s been more than a lifetime since the Sea Lights last shone together, so we can’t help being just a little bit excited. But our celebrations will be tempered not only by the reminder of the horrors of war, but also by nostalgia for the lost profession of lighthouse-keeping – it’s twenty years since the last lighthouse in England (North Foreland) was de-manned.

Also in this article:

What to expect on the night

Neither Bidston nor Leasowe Lighthouse will be open to the public on 11th November. At Bidston, there will be a small private gathering.

The lights will be lit at 7pm and switched off around midnight.

The character of both lights will be “white, fixed” (which means they are white in colour and don’t flash). This is the same as the historical character of the lights when they were last operational.

Technical details and notice to mariners

The lamps that we’re using are ex-service lanterns that we acquired from Trinity House early last year. These are fairly modern (about 15 years old), low-powered LED affairs. Bidston will exhibit a 3-tier SABIK LED-350 (36W) lantern, and Leasowe will exhibit a smaller 3-tier SABIK LED-155 (18W) lantern. These lamps both have a very narrow vertical divergence (about 2 degrees), which means that the light is concentrated into a narrow “focal plane” that widens slowly with distance. If my sums are correct, the bright part of Bidston’s light won’t intersect with an observer at sea level closer than about 4 miles, which is out at sea. Of course the lights will appear much brighter to an elevated observer at close range, like a drone perhaps.

These lights are not as bright as the lamps that were used in the latter days of the Sea Lights. Another difference is the horizontal divergence. When Leasowe was last operational, it used an oil-burning catoptric light (i.e. a parabolic reflector) which gave a fairly narrow beam aimed at the horizon (so it wasn’t as bright off the central axis of the reflector). Bidston’s light was a first order dioptric lens with vertical condensing prisms, also oil-burning; the lens gave a focal plane, with a narrow vertical divergence, while the vertical condensing prisms concentrated the light from the focal plane into a beam centred on the Horse Channel.

Peel Ports issued the official Notice to Mariners on 30 October 2018. The text is reproduced here.

NOTICE IS HEREBY GIVEN that as part of the nationwide WWI Beacons of Light event, the disused lighthouses at Bidston and Leasowe will be re-lit temporarily.

Mariners are advised that the temporary re-lighting of the two lighthouses is for commemorative purposes only, and the lights exhibited must not be considered as aids to navigation.

History of the Sea Lights 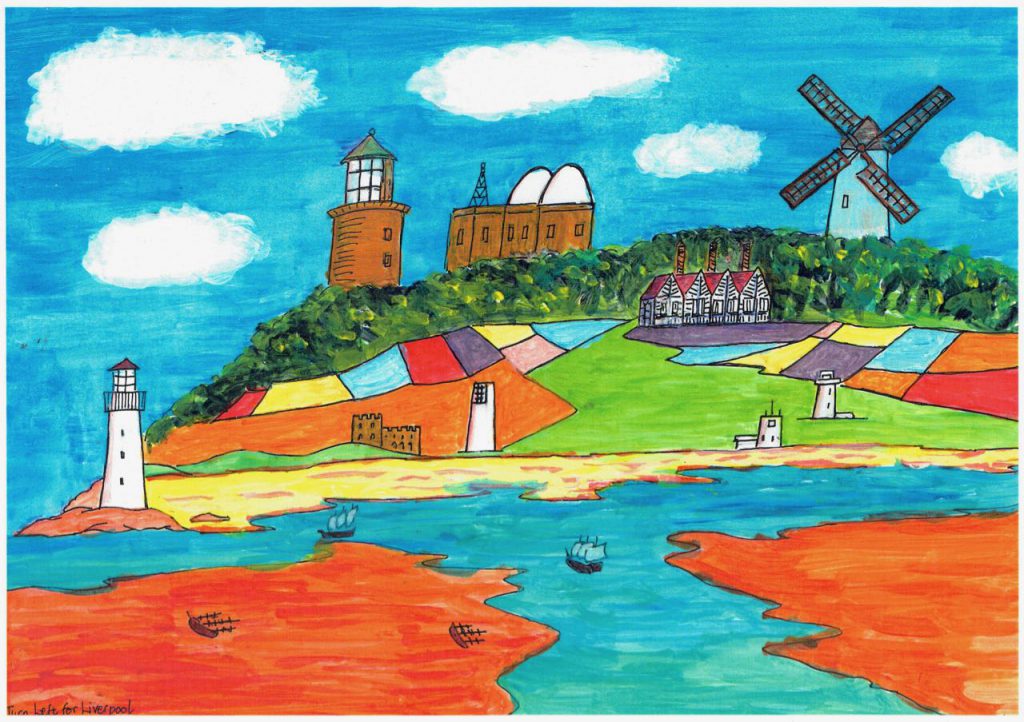 The Sea Lights were originally established in 1763 to guide ships through the Horse Channel, a safe passage between the sandbanks of Hoyle Bank and Burbo Bank in Liverpool Bay, before venturing through the Rock Channel and onwards to the Port of Liverpool. When the original lower light collapsed a few years later, a new lighthouse was built to replace it, 2.3 miles further inland on Bidston Hill. To make this work, Liverpool’s Harbour Master, William Hutchinson, came up with a new method of lighthouse illumination – oil lamps equipped with parabolic reflectors. Bidston’s reflector – a massive 12 feet in diameter – was probably the largest of its kind ever deployed in an operational lighthouse. It wasn’t long before Trinity House, the Northern Lighthouse Board and the rest of the world copied Hutchinson’s invention.

The Sea Lights, at 2.3 miles apart, were the most widely separated pair of leading lights in the world. Bidston Lighthouse, 2.4 miles from the high water mark by Leasowe Lighthouse, claims the distinction of being the world’s most inland lighthouse ever.

The Sea Lights were made obsolete by changes in Liverpool Bay. When Leasowe Lighthouse was discontinued, in 1908 the Horse Channel was barely navigable. Most ships were using the new Queen’s Channel, which is still in use today.

We are grateful to:

Q. If I take a boat out on 11th November, will the Sea Lights guide me safely through the Horse Channel?
A. No! Please don’t do that! The channels and sandbanks of Liverpool Bay have changed a lot since the Sea Lights were last operational. If you do take a boat into Liverpool Bay on the 11th November, you should be able to see the Sea Lights from several miles distance. But for navigational purposes, you should rely on your usual GPS equipment and up-to-date sea charts. There are more than 350 shipwrecks in Liverpool Bay, and we won’t be held responsible for another, despite Wirral’s age-old tradition of wrecking and smuggling!

Q. Aren’t Bidston and Leasowe lit already?
A. No, not really. At Bidston we have a strip of colour-changing LED lights which switch on around dusk and off after midnight. The light from these is unfocussed and can’t be mistaken for an operational Aid to Navigation. There’s a similar arrangement at Leasowe.

Q. What does “nominal range” mean?
A. Without getting too technical, the “nominal range” is a measure of the strength of the light. It’s not related to the “geographic range”, i.e. the distance from which a shipboard observer in clear weather could be expected to see the light if it was bright enough. The geographic range is determined solely by the elevation of the light above the sea. When last operational, the Sea Lights were bright enough to be seen at the full limit of their geographic range (21 nautical miles for Bidston, and 14 for Leasowe).

This article was updated on 31 October 2018 following the release of the official Notice to Mariners by Peel Ports. You can see all the Notices to Mariners for the Port of Liverpool on this page.

There will be a 1914 Village Fete at Leasowe Lighthouse on Sunday 7th September 2104 at 12 noon. All welcome. 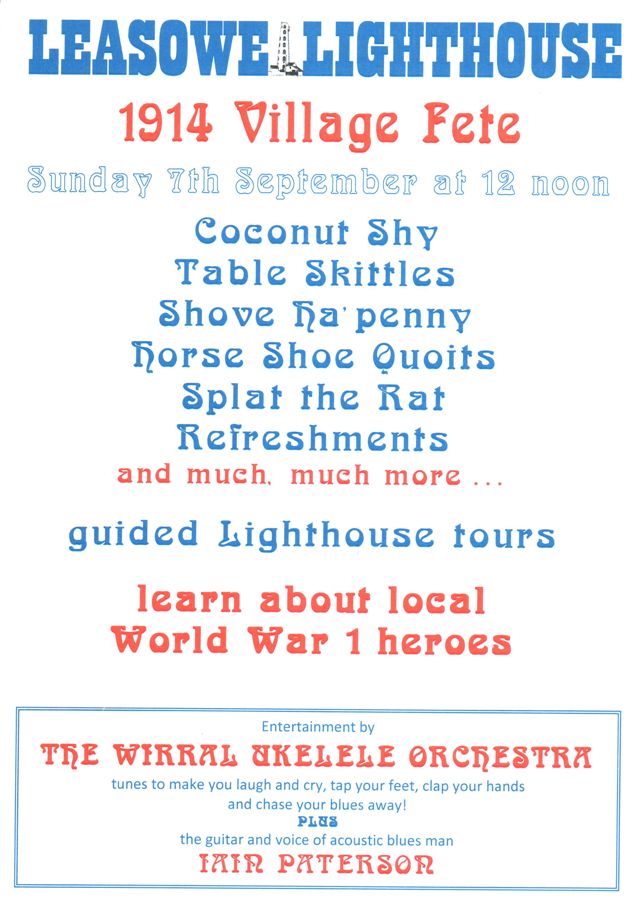 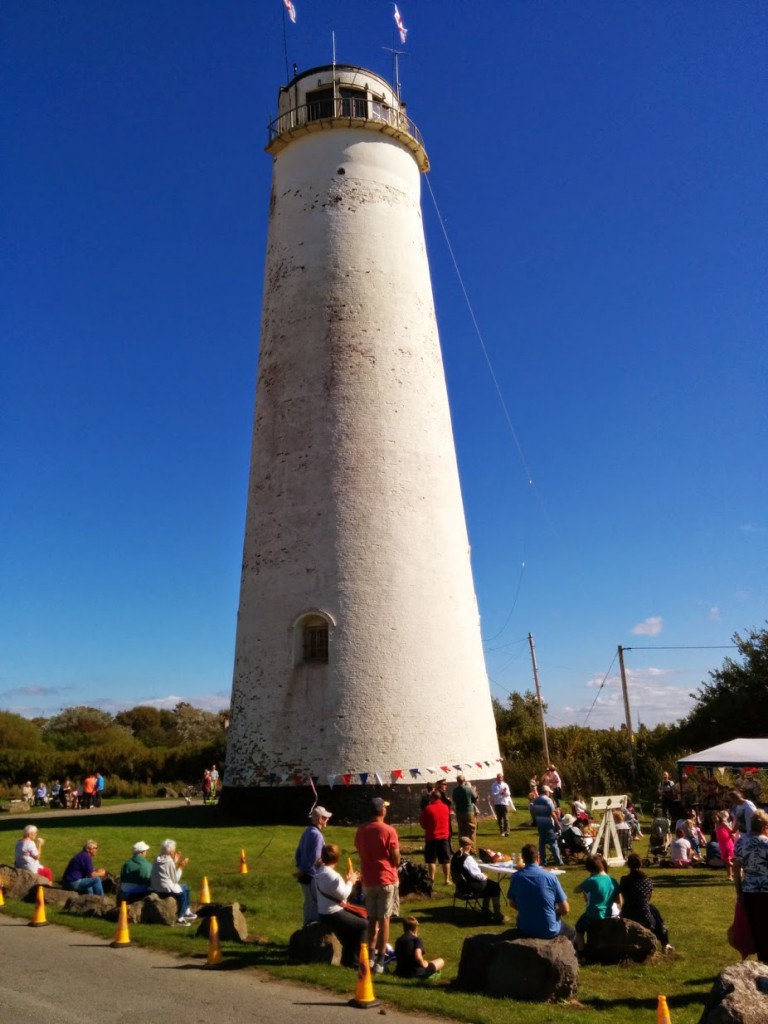