Wally the Woodpecker gets his beak stuck while pecking on the ball vent at Bidston Lighthouse. Pencil sketch by Bob Hughes, 6 June 2021.

Wally the Woodpecker never watched
What it was he was working on.
He would peck here, he wood peck there,
He pecked like a woodpecker everywhere.

But boring holes in tree trunks was very boring work.
Too much head-banging made him go berserk.
Boldly he said “I must branch out!”
So from branch to branch he went
– no, not that sort of branch, oh no –
And then he twigged where he should go.

There was a windmill standing tall.
“That’s something different”, he did call,
“I’ll have a go, those sails look good”,
And so he drummed like a woodpecker should.
He did this many times and oft
But then declared, “This wood’s too soft!”

Now further down along the hill
Rose two white domes and if you will
They were the domes, believe you me,
the domes of an Observer Tree.
Now what the domes were made of,
Nobody really knew
And those who did, they must bave been
but very, very few.
But Wally went and had a go
(By now you’ll know I’m no real bard)
What Wally found and then declared
“My god, that stuff, it’s far too hard!”

He looked across and down the way
And there his eyes were led astray.
He saw another tower rise
Before his very ogling eyes.
And on this tower there was a ball,
Not too big and not too small,
Just the size for Wally to land
And perch and drum, and he did find
To his great pleasure and delight,
He shouted “This one, it’s just right!”

And so it was that every day
Wally came and pecked away.
He pecked and drummed with all his might.
What a noise and what a sight!

But what is this I see today?
Wally seems stuck, can’t get away.
His pecking beak, where has it gone?
I can’t see it, nor anyone.
But then I slowly realise
His beak is there, but in disguise,
In the dome of soft material
He’s broken through (it’s now a serial
I’m writing here about Wally’s beak;
the beak is tough, the metal weak).
The problem is, he’s got it stuck.
He broke in through but out of luck
When he tried to pull it out
All in vain though he did shout.
The problem for our Goldilocks:–
woodpeckers do not live in flocks
to rescue him when need it be.
He could be stuck for eternity.

To find a moral to my tale,
I must admit I fail, I fail.
But if you’re a woodpecker, remember well:
Stick to the woods – or there’ll be hell.

Bob Hughes, 3 Jun 2021 – after visiting Steve and Mandy at the Lighthouse. 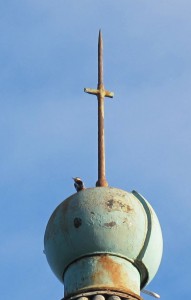 Our woodpecker is back. Here he is, advertising for a mate on Valentine’s Day. He has discovered that the most effective way of creating a loud noise is to peck away at the roof of Bidston Lighthouse. We wish him every success.

Meanwhile, the pigeons have already paired up.

The woodpecker who performed for us last year is back. He has taken to pecking a tattoo on the spherical cupola atop the conical roof on Bidston Lighthouse.

We wish him every success in attracting a mate. 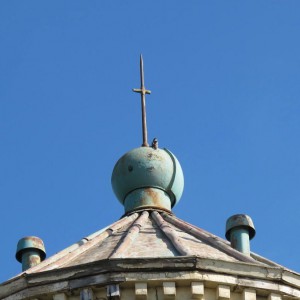 We’ve had reports of woodpeckers seen pecking at the metal roof of the lighthouse. This explains the curious sound that we’ve noticed recently, mostly during the early hours of the day, as the dawn chorus gets under way.

Have you seen the woodpeckers?

Do you have a photograph of them?