The Joseph Proudman Building has been reduced to rubble. I’ve posted a time-lapse video of how it happened. 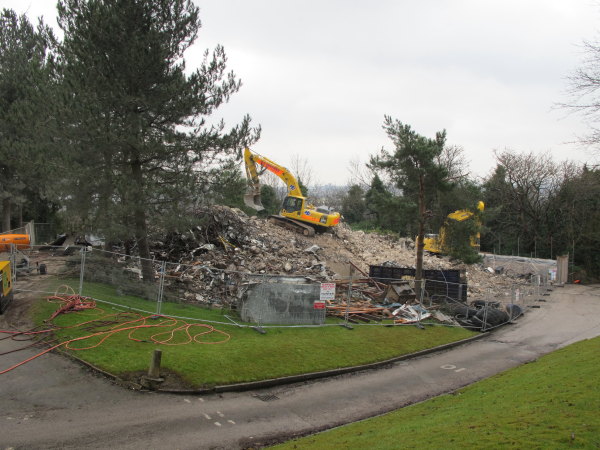 For a while, during a spell of dry weather, the lighthouse and cottages were covered in a blanket of dust — fine, sticky stuff composed of powdered concrete and who-knows-what that blew off the demolition site, turning our hair to straw and leaving a gritty taste in our mouths. When we complained, the demolition contractors promptly deployed a “dust reduction unit”, which sprayed a mist of water into the air, stopped most of the dust from blowing over us, and made our breathing easier. Eventually the rains should wash away the dust that remains. We had been worried about the effect the dust was having on the vegetation. But this morning, we saw the crocuses in bloom, a little late in the season, but apparently healthy.

Soon it will be all over, and we’ll be waking up to the sound of birdsong instead of the rumble of heavy machinery.

One evening a couple of weeks ago, we noticed from our dining room window some pretty lights twinkling through the trees to the east. We hadn’t seen these before, and wondered what they were. Then it dawned on us that we were looking at the lights of Liverpool at night. We will not miss the Joseph Proudman Building.

People keep asking me what will happen next. In the short term, the site will be landscaped and new grass will be sown. In the longer term, we can only guess. We know that NERC want to dispose of their property on Bidston Hill. This includes the Observatory, the site of the former Braehead Cottage, and the leasehold of the site of the former Joseph Proudman Building (Wirral Borough Council own the freehold).

Meanwhile, Wirral Council’s “Interim Planning Policy” precludes new residences on Bidston Hill. While this is in force, I can’t see planning permission being granted for a residential development on either the Braehead Cottage or Proudman site. Presumably, it would be possible to obtain planning permission for a new research facility or office space on the Proudman site, but this does not seem likely — the location is too remote and the network infrastructure is too poor to make a good location for offices

However, Councils are fickle creatures, and Wirral Borough Council, like every other local council in the country, is under severe financial pressure and this shows no signs of letting up. The Council could benefit financially by selling the freehold of the Proudman site to a developer, and the only thing standing in its way is its self-inflicted Interim Planning Policy.

So it’s probably only a matter of time before the council revises its planning policy to suit itself, and the Proudman site is sold to a developer. We have to hope that what’s put in its place is in keeping with the Observatory, Lighthouse and Bidston Hill. A residential development comprising a couple of sandstone cottages might be a satisfactory outcome.  An eleven storey high-rise would not (although plans for such a monstrosity were actually drawn up only a few years ago).

I’d quite like to see the land dedicated as a public park, with a few benches and tables for picnics, and perhaps a visitors’ centre or ranger’s hut. This would be consistent with the spirit in which Mersey Docks and Harbour Board originally sold the Lighthouse site (including what is now the Proudman land) to the Birkenhead Corporation back in the 1930s for the greatly discounted price of one thousand pounds, on the understanding that it would be used for the recreation of the people of Birkenhead. Incidentally, there is in the document that conveyed the land to the Birkenhead Corporation a covenant forbidding the erection of new buildings. But that covenant did not stop the construction of the Joseph Proudman Building… 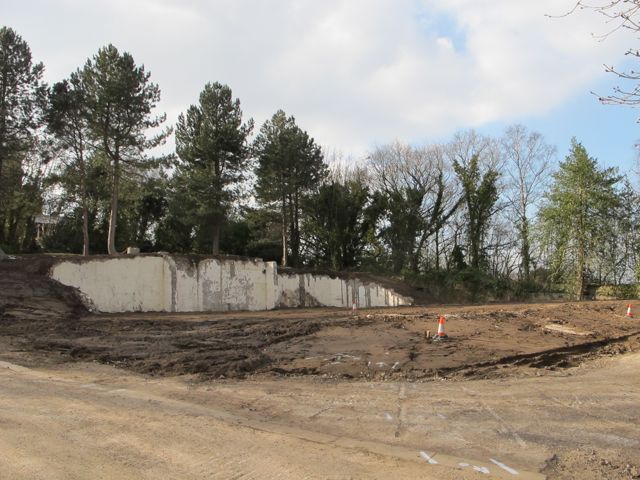 After the demolition of the Joseph Proudman Building

4 thoughts on “Dust to Dust”