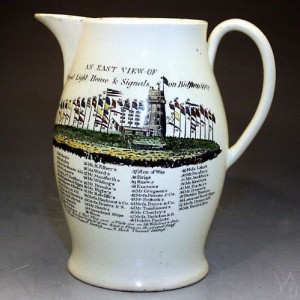 In the twenty first century, we take electronic communications for granted. Most of us can’t remember a time without radio, telephone, and television. Email, text messages, twitter, social networks are part of our daily lives. We’ve almost forgotten about telegrams and fax machines. No-one living today was around when the Bidston Hill Signals were the state of the art in communications.

It is difficult for us to imagine today just how important the Bidston Signals were to the people of Liverpool. News of the imminent of arrival of ships into port was valuable enough to justify building more than one hundred flagpoles along the ridge of Bidston Hill, and paying teams of workers to operate them. Later on, the Liverpool to Holyhead telegraph was established, with pairs of semaphore masts were placed at relay stations on Bidston Hill, Hilbre Island, and so on, all the way to Holyhead. The signals were truly a part of popular culture, and even featured on mundane items of pottery.

What a sight it must have been! This is how Albert Richard Smith described Bidston Hill in 1848, in his book The struggles and adventures of Christopher Tadpole at home and abroad:

But the sight was so riveting that he could not take his eyes from it scarcely, even to notice the lighthouse under whose very walls they passed, with its array of signal-masts that looked as if somebody was either preparing a great display of fireworks, or making ready to set sail and carry the entire hill, lighthouse, telegraph and all, out to sea upon the first fair wind.

“That’s a curious thing,” said Hickory, as he pointed to the telegraph. “I’ve heard there’s people that can read that gibbet just like a book. I never could, not to speak of. I’ve made out a F, and a L, and a E without the middle, and sometimes they was upsy-down. And once I saw it trying uncommon hard to turn itself into a H, but it wasn’t much of a go, not to speak of.”

But most poignant of all perhaps is this account of a sailor’s wife, who looked anxiously to the Bidston Signals for news of her husband:

I have frequently seen a very particular friend of mine, a sailor’s wife, who considers herself, occasionally, the happiest woman in the world, watching the wind, from “sou’ sou’ east—nor’ nor’ east—east and by no’th,” and, with a pair of compasses, leaning over a large chart, endeavouring to trace her husband, by counting the days, and allotting so many degrees of longitude and latitude to each day, to the extent of the voyage; and have whispered to her, in her calculations, “wind and weather permitting.” I have seen this very happy woman pace the room at midnight, if the wind ever attempted to blow from an adverse quarter, and have reasoned with her about

“The sweet little cherub that sits up aloft,
To keep watch for the life of poor Jack”

I have even seen her turn tide-waiter, and count the poles on Bidston Hill, on which a flag on the top announced from the Lighthouse that the expected vessel was in the offing. In another state of her happiness, I have heard her heart beat, when, in looking through the telescope, she dreaded lest, among a sickly and reduced crew, he should not be there; and have been present in another felicitous moment, when the report came, that all was lost, yet was she, occasionally, very happy!

From “Seamen’s Wives”,  in SKETCHES IN PROSE AND POETRY, by Katharine Head, Kirkdale, Liverpool, 1837.