Our application to change the use of the cottage to residential was finally approved. This was after a disconcertingly long wait, while the planning committee deliberated on the difficult question of whether allowing us to live in our one-hundred-and-thirty-eight-year-old, continuously occupied cottage would count as approving a new residence, which would have breached the council’s self-inflicted Interim Planning Policy.

With a lot of help from our friends, we’ve made good progress with re-decoration and minor repairs, and the cottage is feeling much more homely. We’ve replaced several window sashes, re-pointed the lamp-room platform with lime mortar (curing all but one of the leaks), had two ceilings re-skimmed, and some carpet laid. We’ve stripped the ugly cheap cladding off our doors, which turn out to be rather beautiful four-paneled hardwood affairs, and planed and re-hung them all. We removed countless telephone, printer and token-ring cables and thousands of cable clips from the walls and skirting boards (some of which are made of plaster instead of wood). We’ve painted one bedroom with buttermilk, defiled another with willow-green, and splashed our hall with dragon’s blood and terracotta. The lighthouse oil-room now has fifteen white Billy bookcases of the narrowest sort that Ikea make (wide book-cases just don’t work when your walls are round). Anyway, the effect is surprisingly good, and we’re very pleased with our library.

In the process, we learned some interesting things about the lighthouse cottages. The building was designed to accommodate three keepers, two with families. The three cottages each had their own front door, and were connected to each other and to the lighthouse via a common hallway, which was lined with Ruabon tiles (sadly concreted over during the NERC interregnum). The hallway was illuminated by natural light which was admitted through skylights along the ridge of the roof, as was the bedroom of Number 2, which had no external walls. You can still see the panes of the glass from the roof void, and you can make out the skylights on the original architects’ drawings from 1872, which are held in the archives of the Merseyside Maritime Museum. It would appear that at some point in the building’s history, a new roof was built on top of the old one. When electricity and water came to the building in the 1950’s, a dividing wall was erected bisecting Number 2 Lighthouse Cottages, to create bathrooms and utility rooms for Numbers 1 and 3. Sad, really.

We have engaged an architect and filed an application for listed buildings consent. We’re applying for permission to fit a letter box and cat flap in the front door, re-purpose one of the rooms as a kitchen, remove barbed wire from the building, replace perspex window panes with glass, and re-open access between the cottage and the lighthouse (which was bricked up many years ago). Yes, all these things do require listed buildings consent.

Worse, as we were informed yesterday, they also require building regulations approval and a bat survey!

You see, there are bats in the area. Some roost in the Windmill over winter.

So, today we had an initial bat inspection done. Fortunately, there are no signs of any bats occupying the cottage, not even in the roof void or the disused porch of Number 2 (which would make an ideal bat roost). Nor are there any signs of bats occupying the lighthouse. However, we didn’t inspect the void inside the copper roof of the lighthouse, just in case. This is because if bats were using the space as a hibernaculum, the body heat from the inspector could be enough to rouse the little beasties from their torpor, which can so easily prove fatal. So we’ll have an “emergence inspection” in the spring. 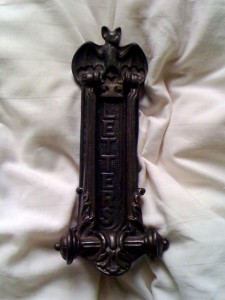 Nonetheless, the likelihood of there being any bats in the lighthouse roof is minimal. It’s too windy for one thing. For another, we know that pigeons use it from time to time (we’ve heard their cooings and found their droppings), and bats don’t usually cohabit with pigeons.

Anyway, we’ve finally found the letterbox of our desire.