William Hutchinson, Liverpool Dockmaster, revolutionised lighthouse optics with the introduction of the parabolic reflector. He conducted experiments at the Bidston Signals Station during the 1760s, and subsequently installed reflectors in the Wirral Lighthouses. He writes, in his Treatise on Practical Seamanship:

“We have made, and in use here, at Liverpool, reflectors of one, two, and three feet focus ; and three, five and a half, seven and a half, and twelve feet diameter ; the three smallest being made of tin plates, soldered together ; and the largest of wood, covered with plates of looking glass”.

Hutchinson installed the largest one at Bidston Lighthouse, which was furthest from the sea. The large reflectors had some problems: they used a lot of oil, and smoke from the wick tended to obscure the reflector. Eventually, it was found that several smaller reflectors, arranged so that their beams were parallel, gave an equally bright light and used less oil.

Trinity House have an eighteenth century parabolic reflector in their collection. Its diameter is twenty inches. 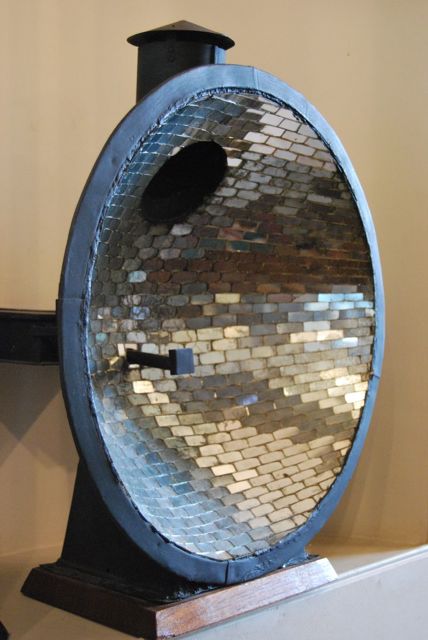 Little is known about the provenance of this reflector, because, sadly, Trinity House was bombed in 1940, and many of its records destroyed. The reflector will be on display at the National Maritime Museum in Greenwich from March 2014 until January 2016.

Acknowledgments. My thanks to the Corporation of Trinity House and Neil Jones, Archivist, for permission to use the photograph of the catoptric reflector.