In 1785, the French engineer Joseph Cachin drew this delightful illustration of Bidston Lighthouse. 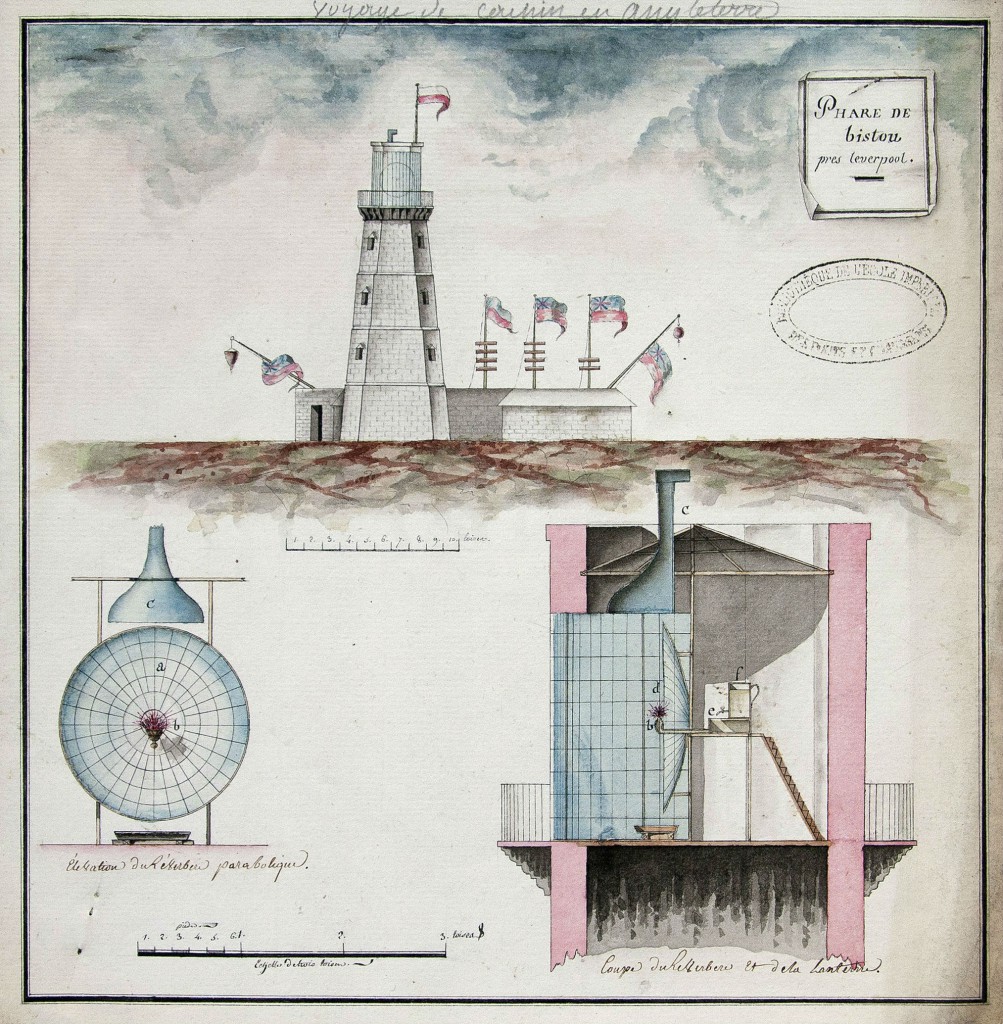 Drawings of Bidston Lighthouse and reflector, by Joseph Cachin, 1785.

Cachin’s careful drawings include a scale, and one can take measurements from them. The scale is in toises and pieds du roi. These units were used in France before the Revolution. There were twelve pouces in one pied du roi, and six pieds du roi in one toise. Pouce, pied du roi and toise correspond respectively to the Imperial units inch, foot and fathom, but were slightly longer. Thus one toise was 1.066 fathoms, 6.394 feet, or 1.949 metres.

If you measure the diameter of the reflector in the drawing using Cachin’s scale, and convert back to Imperial units, you should get a value very close to 12 feet. This is the size that William Hutchinson reported in 1777 in his Treatise on Practical Seamanship, but less than the thirteen-and-a-half feet reported by Robert Stevenson when he visited Bidston Lighthouse in 1801. Perhaps Stevenson was more casual while he was still learning the trade of lighthouse-engineering, for he seems also to have exaggerated the height of Leasowe Lighthouse.

Bidston’s reflector was (probably) the largest parabolic reflector ever to be installed in an operational lighthouse. It was also one of the first – Hutchinson installed parabolic reflectors in all the Wirral lighthouses about the same time. Hutchinson’s breakthrough in lighthouse optics was driven by the needs of Bidston Lighthouse, which was built further from the body of water it lit than any other lighthouse in the world (a record it holds to this day).

As far as I know, Cachin’s is the only drawing to show a cross section of the lamp room, with the stairs that the keeper would climb to replenish the oil reservoir, and the elaborate chimney through which the smoke and vapours of the lamp would escape.

Joseph Cachin (1757-1825) was a French engineer, best known for his work at Cherbourg Harbour. In 1785, while at the École Nationale des Ponts et Chaussées, he travelled to Britain and the United States. In England, he visited the ports of Sheerness, Liverpool, Bristol, Portsmouth, the quarries of Portland, and the Hospital at Greenwich. He examined lighthouses and lime-kilns, the cranes on the Bridgewater Canal, and studied the materials used in their construction. (Readers of French can check my translation against this article.)

My thanks to Thomas Tag of the United States Lighthouse Society for bringing the drawing to my attention.

1 thought on “The French Visitor”