We have a new gate. We hope you like it. 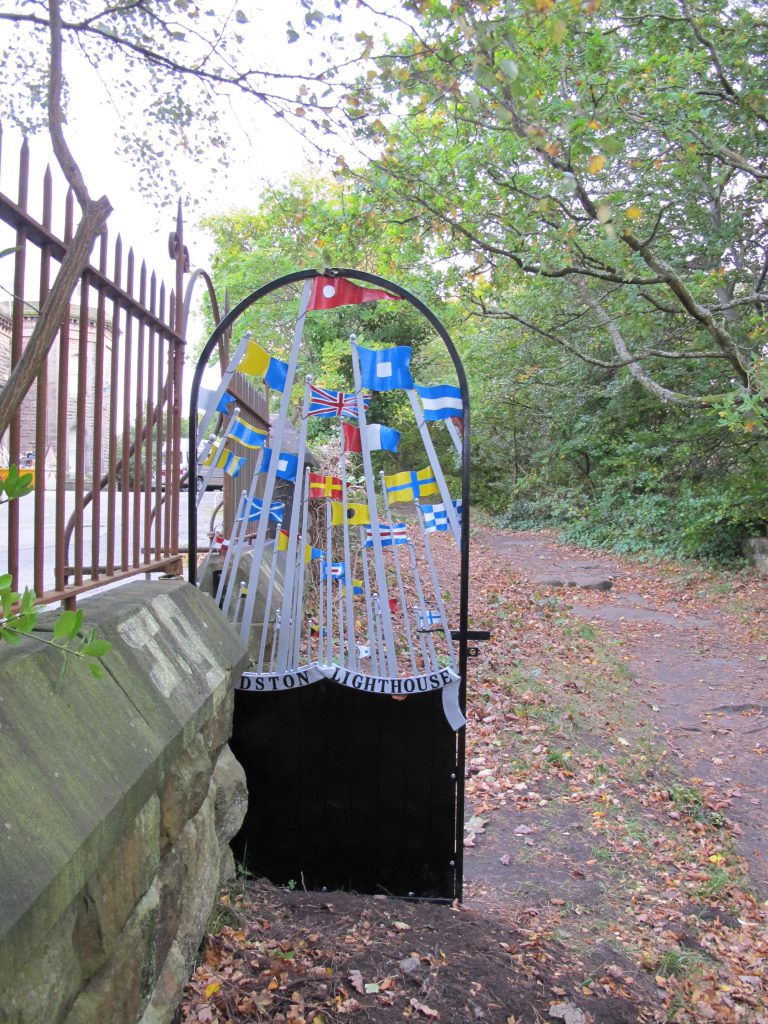 The gate leads from the grounds of Bidston Lighthouse onto Bidston Hill, where it joins the path from Bidston Village to Bidston Windmill, alongside Penny-a-Day Dyke, the medieval wall. It replaces a derelict gate that had been disused for decades.

We have wanted to renew the gate for a long while. The derelict gate was an eyesore, and Bidston Hill deserved better. A functioning gate would benefit visitors to the lighthouse as well as the many thousands who walk past it every year. And wouldn’t it be nice if the gate could incorporate a motif reminiscent of the flag signals that used to run the length of Bidston Hill?

Next, we had to find a local blacksmith with the right skills for the project, and then work out the details of the design. When we found artist blacksmith Alex Price, we knew we had our man. What convinced me was some fine examples of his intricate metalwork, especially a fire-grate featuring a leaf motif – if anyone could work a flag motif into a bespoke gate, it was Alex.  I visited his forge at the National Waterways Museum at Ellesmere Port and briefed him on the project: the gate had to fit into the existing opening, had to feature a flag motif, and should incorporate a wooden panel (in keeping with the old gate as well as the nearby “lych gate” at Bidston Observatory), and be achievable within our limited budget. Alex came back with a series of designs, one of which stood out. There was no turning back. This gate just had to be made.

But before we could start work, we needed to obtain Listed Buildings Consent. You see, the wall in which the gate is located is a Grade-II listed building in its own right. The perimeter wall enclosing the site of Bidston Lighthouse and Bidston Observatory was remodelled in the 1860s by George Fosbery Lyster, Engineer-in-Chief to the Mersey Docks and Harbour Board, around the same time that the Observatory was built. The lower part of the wall is about a century older, probably dating back to when the Bidston Signals Station and Bidston Lighthouse were established. Apart from Listed Buildings Consent, we also had to obtain consent from everyone else who owned part of the building in question, namely Wirral Council, the Natural Environment Research Council, and the new owners of Bidston Observatory. We also discussed the project with the Friends of Bidston Hill. Needless to say, this process took several months, but finally the necessary consents were secured and we could give Alex the go-ahead.

The Friends of Bidston Hill helped out by clearing away some of the ivy which was encroaching on the wall. 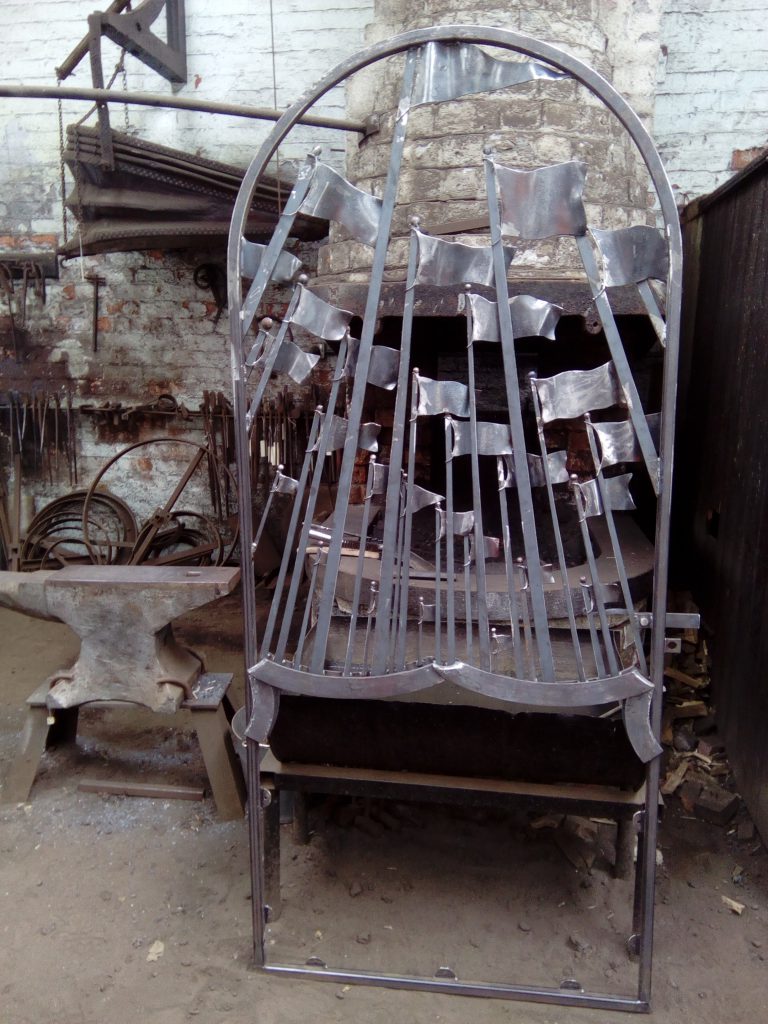 At the forge. Gate ready to be galvanised.

The gate was installed on 15th September. 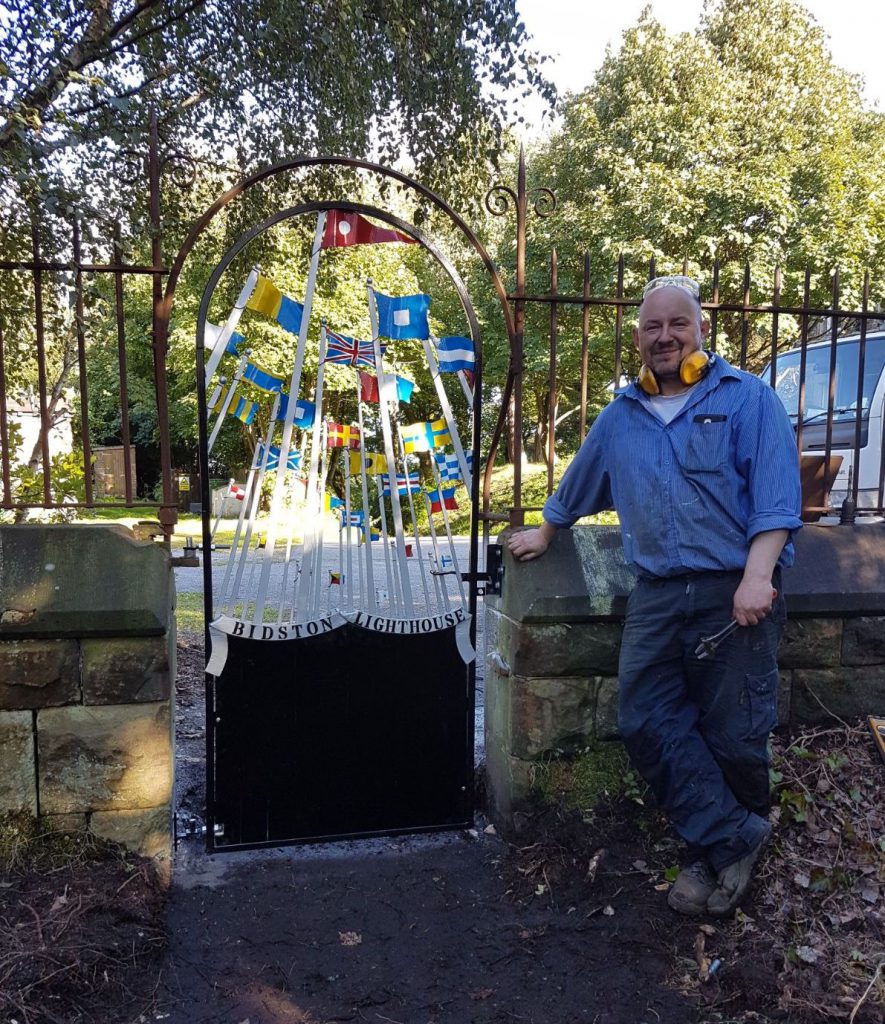 There were other complications along the way. At some point in the past, tarmac, about 8 inches deep, was laid on the inside of the gate. We had to excavate this, and remove the tree roots and soil that had built up underneath the old gate. Eventually I uncovered the original sandstone threshold beneath the gate. I also exposed a telephone cable, which does not appear on any utility survey, but probably serves the lighthouse cottages. So I still have some work to do: bury the telephone cable and make a step up from the threshold to the level of the tarmac – and paint the railings, of course.

Deciding on the colours for the flags and penants was a little tricky. We wanted to be historically accurate, only using flags that were known to be flown on Bidston Hill in the heyday of the flag signals. But there’s very little documentation on this subject. Salmon’s painting from 1825 shows a few flags in full colour; but in another painting by him of the same subject, he chose different colours for the same flagpoles. There is an 1807 engraving of the Bidston Signals in the collection of the Williamson Art Gallery, but the colours were added later, and may be fanciful. We don’t even know for sure whether the colours of flags shown on a flagpole were significant; the position of the flagpole was certainly important, and contemporary accounts describe people as counting the poles to determine if a certain shipowner’s flag is flying. There is some documentation on the house flags of shipping companies (such as Brown’s Book of Flags and Funnels) but this first appeared long after the Bidston Signals had ceased. So we compromised. We restricted the choice of colours to flags that were in one of several systems of flag codes for ships, viz. Marryat’s Flags, the Liverpool (or Watson’s) Code, the Commercial Code, and the International Code of Signals, even though these systems came along much later. If more information comes to light, we can always re-paint them!

DONG Energy (NASDAQ OMX: DENERG) is one of Northern Europe’s leading energy groups and is headquartered in Denmark. Around 6,200 ambitious employees, including over 900 in the UK, develop, construct and operate offshore wind farms, generate power and heat from our power stations as well as supply and trade in energy to wholesale, business and residential customers. The continuing part of the Group has approximately 5,800 employees and generated a revenue in 2016 of DKK 61 billion (EUR 8.2 billion). For further information, see www.dongenergy.co.uk or follow @DONGEnergyUK on Twitter.

GrantScape is a grant-making charity committed to enhancing the environment and strengthening local communities through its grant programmes. GrantScape’s experience stretches back to 1997 and it has awarded grants totalling over £80 million to deserving projects over this time.

GrantScape manages a range of community and environmental grant programmes on behalf of corporate and local authority clients. These are tailored to their individual requirements, which is the charity’s speciality. In addition, GrantScape offers a professional project management and grant process review service to groups requiring support with these activities.

The Burbo Bank Extension offshore wind farm is located 7km off the coast of Liverpool Bay, at the entrance to the River Mersey. Onshore construction began in 2015, offshore construction started in 2016 and the project was officially opened in May 2017. The offshore wind farm has a total capacity of 258MW, enough to power over 230,000 homes. The project is owned by DONG Energy (50%), PKA (25%) and The Lego Group (KIRKBI A/S) (25%).

The Fund supports community and environmental projects along the North Wales and English coast, off the Irish Sea, within a defined area. Approximately £225,000 is available each year. The Fund is split equally between two annual funding rounds. There are two levels of grants available:

Applications to the Fund are made using an online application system via the GrantScape website www.grantscape.org.uk.