Last week, I had the good fortune to visit Hull for the Maritime Heritage Forum.

I picked a great year to do it. Hull, in case you didn’t know, is the UK City of Culture for 2017. There’s a veritable buzz about the place, and the low skyline makes for a refreshingly open feel. Across the road from the Hull Maritime Museum is the Ferens Art Gallery, home to this year’s Turner Prize. The Spurn Lightship is part of the Maritime Museum’s Collection. (I don’t know why it’s painted black, any more than I know whether we’ll ever see the Bar Lightship “Planet” back in Liverpool again.) 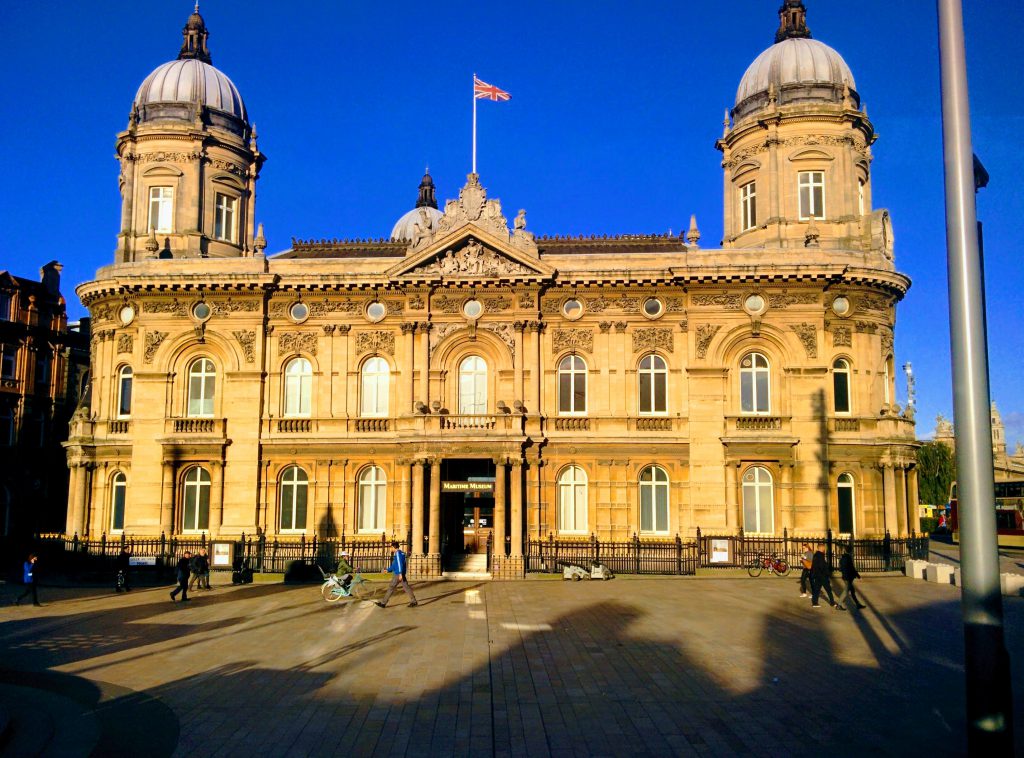 I’d been thinking about Hull – or Kingston-upon-Hull to give it its full name – for a while. Like Liverpool, Hull’s heritage derives from the sea, and I wanted to explore the connections.

As a lighthouse enthusiast, I had to make the pilgrimage out to Spurn Lighthouse. The lighthouse is no longer operational, and the site is now managed by the Yorkshire Wildlife Trust. It’s a long hike out to the lighthouse from the nearest public parking – the Spurn was breached by the sea a few years ago, and the road out to the lighthouse is no longer open – so I booked a place on the Spurn Safari Unimog. The history of the Spurn Lighthouses (there have been many, including one built by Smeaton himself) is a fascinating intersection of changing technology, politics, and geography. Spurn Head (or just “the Spurn”) is a spit at the northern bank of the Humber estuary – and it’s constantly changing. It’s possible that there’s been as many as four distinct Spurns in the last 1000 years, each new one building up as the previous is breached and destroyed by the sea.

Both Hull and Liverpool have traditions of telecommunications, born out of the ports’ hunger for information.

Liverpool and Hull share a more historic connection. In the first half of the 19th century, both cities had optical (semaphore) telegraphs, connecting the port to the coast, and both were built by the same man, Barnard Lindsay Watson.

This brings me at last to the main purpose of this post, to set down what little I know about the Hull-Spurn Telegraph.

In an earlier post, I noted that a certain Mr Boaz proposed, way back in 1803, to construct a system of telegraphs linking Liverpool to other major seaports in the United Kingdom, including Hull. Although the Admiralty did establish a line of coastal signal stations in 1804, it wasn’t until much later that commercial telegraphs began to appear, the first of these being Barnard Lindsay Watson’s Liverpool-Holyhead telegraph in 1826.

1839 was a tumultuous year for Watson. January brought the great gale of 1839, which laid waste to much of the Liverpool-Holyhead telegraph. Watson started to re-build. In the original telegraph, each station had a single tall mast with three pairs of semaphore arms, each of which could signal a digit from 0-9, and an extra indicator on top. The new telegraph had two, shorter masts, each with two pairs of arms, giving an enlarged vocabulary of 10,000 words. Around this time, in an effort to raise funds, Watson announced that only subscribing vessels would be reported by the telegraph.

In March of the same year, the Hull Chamber of Commerce and Shipping commissioned Watson to survey potential sites for a telegraph along the Humber.

The Liverpool Dock Committee didn’t take kindly to all this. This was not the behaviour the Trustees expected of an employee. Watson’s outside interests could no longer be tolerated. Watson had been allowed to sell his propriety flag signals to ship-owners for many years. But when the Dock Committee learned that he’d been secretly collecting intelligence for insurance companies, it was the last straw.

In May 1839, the Liverpool Dock Committee dismissed Watson. The re-construction of the Liverpool-Holyhead telegraph was completed under a new superintendent, Lieutenant William Lord, R.N.

Perhaps relieved to be freed of his obligations to the Liverpool Dock Committee, Watson pressed on with the construction of a new telegraph linking Hull to Spurn Head. The telegraph opened in September 1839. 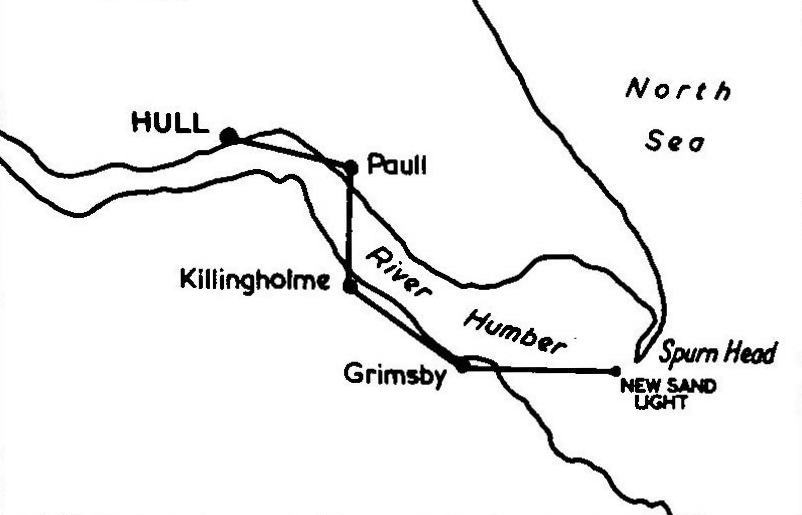 Stations in the Hull-Spurn optical telegraph. From “The Old Telegraphs” by Geoffrey Wilson.

The line criss-crossed the Humber estuary, with stations at Hull, Paull, Killingholme, Grimsby with the last (or first station) at “New Sand Light”. So, where or what exactly was “New Sand Light”? It probably wasn’t on the Spurn proper, if Geoffrey Wilson’s sketch in his excellent book “The Old Telegraphs” is to be trusted. My guess is a lightship at the Bull Sands station, which was establised in 1832. Watson himself mentioned “the valuable assistance afforded me by the Corporation of the Trinity House, in granting me permission to place a telegraph on board their floating light off the Humber”.

I don’t know whether anything remains of any of the telegraph stations in the Hull-Spurn line. (If you do, please drop me a line.)

After the opening of the Hull-Spurn line, Watson did go on to build more telegraphs, including:

He also established independent (i.e. not part of a telegraph) signals stations at various places around the country, such as Flamborough Head. Very often these stations were located at or near the site of an existing lighthouse. 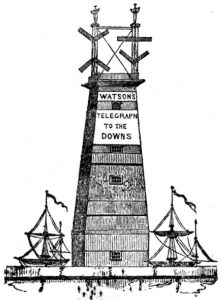 Watson’s Telegraph to the Downs, 1842

Watson went bankrupt more than once: in 1831, while a flag manufacturer in Liverpool; and again in 1842, now based in London and Kent.

Following his 1842 bankruptcy, Watson re-launched the General Telegraph Association as a joint stock concern. The fire of 1843 was the last straw. The semaphore tower was not insured, the London smog was an ongoing problem, and new technology – the electric telegraph – posed an emerging threat. Watson left the telegraph business, and set himself up as a hotelier, at the Pulteney Hotel in Bath (now the Holburne Museum) only to go bankrupt again, in 1848. His last gig was as manager of the refreshment rooms at the Crystal Palace in Sydenham. He died in Suffolk in 1865, and was buried at St Peter’s, Monks Eleigh.

Only two of Watson’s telegraphs survived the failure of the General Telegraph Association.

The Liverpool-Holyhead telegraph was the longest lived.  The Liverpool-Holyhead line continued until 1861, when a new electric telegraph along (approximately) the same route was finally completed. Construction had started in 1858 and the line was partially operational in 1859, but submarine crossings proved problematic – this is why Puffin Island was removed from the circuit.